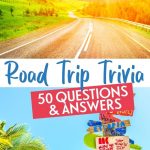 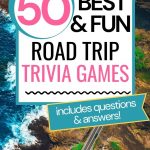 Are you looking for ways to pass time on your road trip? I’ve got you covered! Here are 50 fun road trip trivia questions and answers to keep you entertained!

Road trips are very different from any other type of travel. You have complete control over which places you want to visit and when. And while this freedom is a huge perk, road trips also usually mean long hours on the road.

There are many ways that you can fill your time between road trip stops. You can sing along to your favorite songs, read a good book, snack on delicious bites, and play a few road trip games. And, I’m here to add another suggestion to the list!

As you’re driving around on your road trip, you can play some road trip trivia! You can learn all about the best road trips in the world, test your car knowledge, and find out some fun facts about national parks.

Simply put, if you’re looking to stay entertained, this road trip trivia guide is a fantastic idea! And before you start your road trip, be sure to read my road trip packing list to make sure you aren’t forgetting anything! 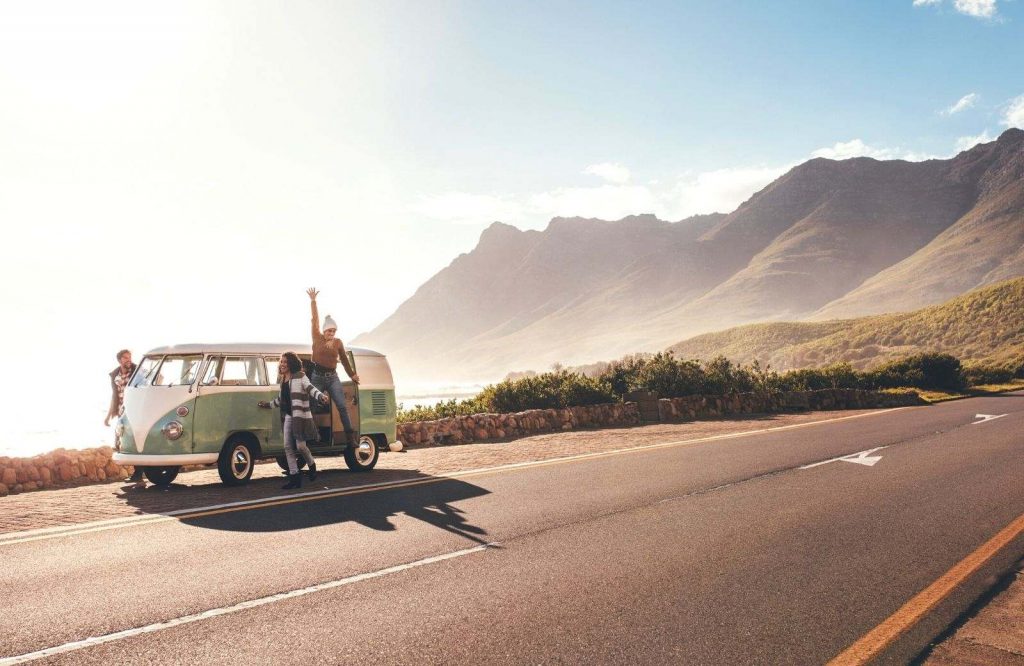 Question: When was the US Highway System started?

Answer: On June 29, 1956, President Dwight D. Eisenhower signed the Federal-Aid Highway Act of 1956. This act allowed the U.S. Interstate Highway System to be funded and built. This highway system was originally built both for civilian use and for military purposes.

Question: How many miles of roads does the US have?

Answer: The United States has just over 4 million miles of roads!

Question: What is the longest road in the US?

Question: What is the shortest road in the US?

Question: What is the longest road in the world?

Question: What is the shortest road in the world?

Answer: Ebenezer Place in Wick, Caithness, Scotland. This tiny road holds the Guinness World Record as the world’s shortest street at a grand total of 6 feet and 9 inches long.

Question: What is the most dangerous road in the world?

Answer: While this title is debated, most experts believe that North Yungas Road in Bolivia is the most dangerous road in the world. Also known as the “Road of Death,” North Yungas Road features narrow roads, steep cliffs, and thick fog. Approximately 200 to 300 people die while driving on North Yungas Road every year.

Question: What German road is one of the only spots in the world without a speed limit?

Answer: The Autobahn in Germany. While there is a recommended speed of 130 kph (81 mph), drivers are not required to follow it. That said, if a car accident occurs, the driver will have to deal with more consequences if they were driving at a faster speed than the recommended 130 kph, even if the accident is not the driver’s fault.

Question: What island holds the title of the “Road Racing Capital of the World,” due to the fact that there are no speed limits?

Answer: The Isle of Man. This little island is located between Great Britain and Ireland. While there are no speed limits on the Isle of Man, you can still get a ticket for unsafe driving.

Question: Which country has the largest road network?

Answer: The United States. It has over 4 million miles of roads!

Question: Which country has the smallest road network?

Question: Which state has the largest public road network?

Question: Which state has the smallest public road network?

Question: What is the name of the road that runs most of the California coastline?

Answer: The Pacific Coast Highway, also known as PCH or California State Route 1. Along the way, you can stop at iconic Cali beachfront towns, including Santa Monica, Malibu, Santa Barbara, and Big Sur.

Question: Which famous US road was featured in the Disney movie, Cars?

Answer: Route 66! As a matter of fact, many of Route 66’s real-life attractions are featured in this Disney movie. You can see variations of Cadillac Ranch (Cadillac Range), the Wigwam Motels (the Cozy Cone Motel), and U-Drop Inn (Ramone’s).

Question: What is the name of the waterfall-filled winding road in Maui, Hawaii?

Answer: The Road to Hana! This winding 64-mile drive takes you to some of the most beautiful spots on Maui, including Oheo Gulch, Waianapanapa State Park, Twin Falls, and the Garden of Eden Arboretum.

Answer: Blue Ridge Parkway. This 469-mile road takes you past many beautiful natural landscapes. While driving on Blue Ridge Parkway, you can make stops to hike part of the Appalachian Trail, paddle on Fontana Lake, or spelunk in the Luray Caverns.

Question: How many islands will you drive on while on a Florida Keys Road Trip?

Question: What is the name of the famous leaf-peeping route in Vermont?

Answer: The Green Mountain Byway. The lovely road is filled with fire-colored leaves every fall.

Question: What was the first federally funded road in the US and where does it start and end?

Question: In what country is the Great Ocean Road located?

Answer: Australia! The Great Ocean Road starts in Torquay and finished in Allansford. Along the way, there are dozens of amazing stops, including the Twelve Apostles, Loch Ard Gorge, Kennett River, Great Otway National Park, and Apollo Bay.

Question: What oceanfront Italian road is known for lemons and Limoncello?

Answer: The Amalfi Coast. As you drive along the coast, you’ll notice loads of lemon trees, lemon snacks, and lemon-bedecked souvenirs. And with all of these lemons, the Italians, of course, make loads of the lemony liqueur known as limoncello.

Answer: Iceland’s Ring Road. This road is 828 miles long! It actually takes about two weeks to drive Iceland’s Ring Road and see the dozens of noteworthy stops. A few of the best destinations along the Ring Road include the Blue Lagoon, the Skogafoss Waterfall, Reynisfjara Black Sand Beach, Jokulsarlon Glacier Lagoon, and Kirkjufell Mountain. 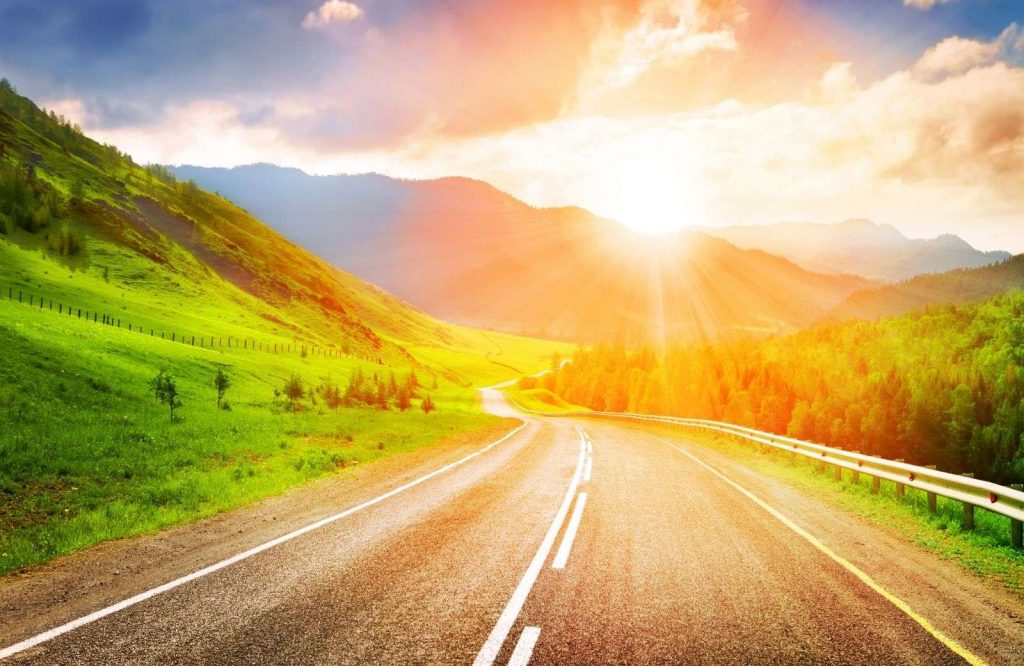 Question: What country made the first automobile?

Answer: Germany. Karl Benz is given the credit for creating the first automobile in the 1880s.

Question: What was the first car to be mass-produced?

Answer: The Model-T. Thanks to Henry Ford’s creation of the assembly line in 1908, Model-Ts became the first mass-produced car in the world!

Question: What was the first car to break the sound barrier?

Answer: ThrustSSC. While driving this jet car in 1997, Andy Green became the first person on land to go faster than the speed of sound.

Question: All Ferraris were originally the same color. What color was it?

Answer: Red. At the time, the International Automobile Federation (FIA) stated that all Italian Grand Prix racecars had to be red.

Question: How many parts does the average car have? 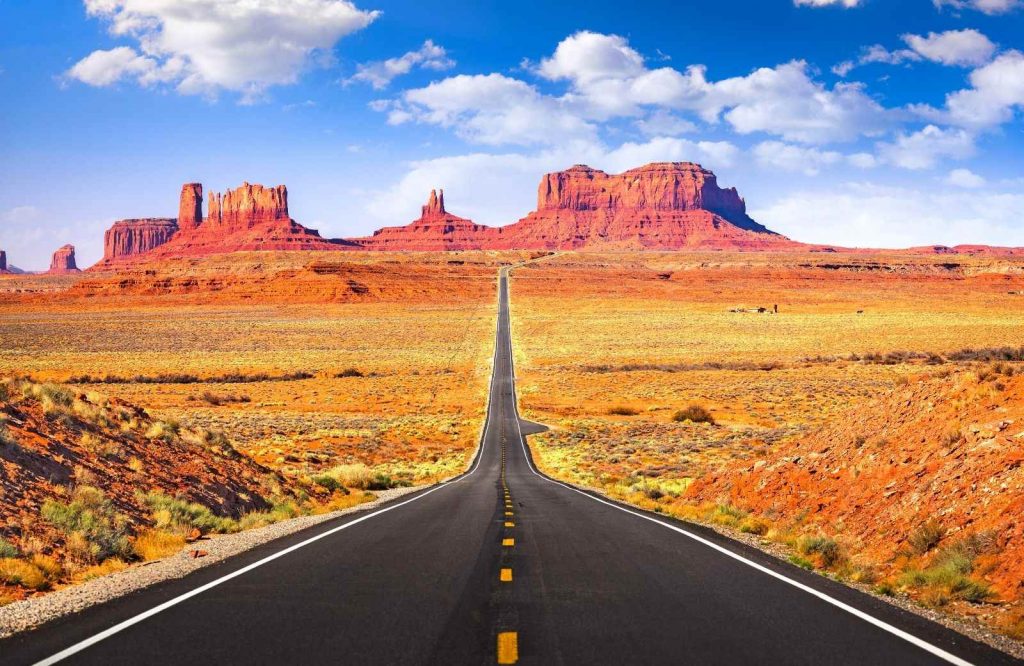 Question: How many national parks are there in the US?

Question: What was the first US national park?

Question: What was the first piece of land the US government decided to preserve for recreational purposes?

Question: Where was the first national park in the world?

Question: What is the most visited national park in the US?

Question: Which US national park is home to the longest cave system in the world?

Question: Which US state has the most national parks?

After California, Alaska is a close second with eight national parks within its borders. 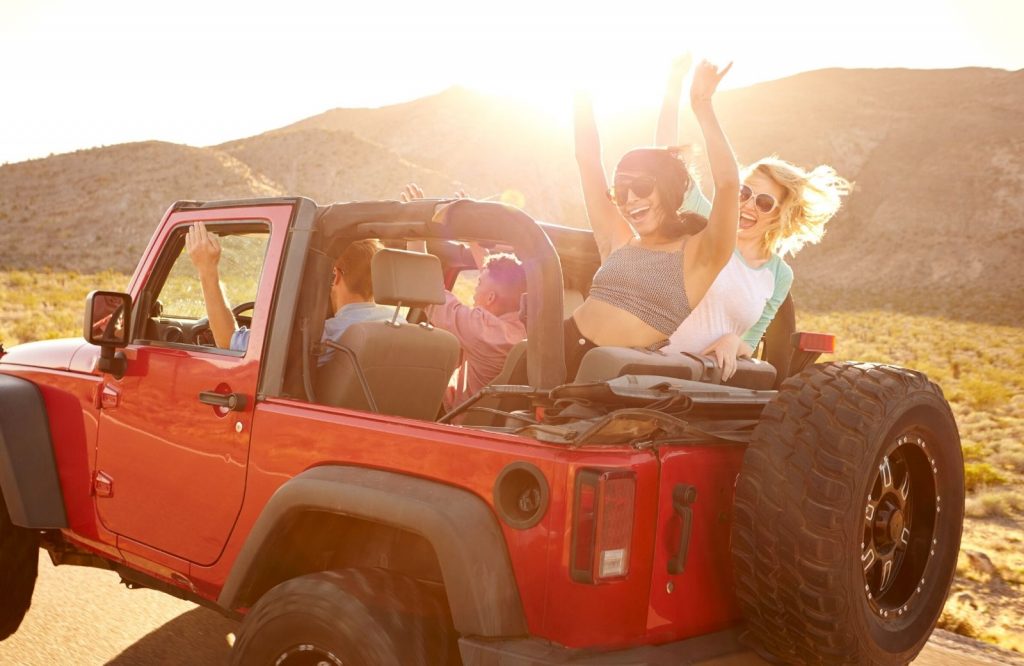 Question: What Janis Joplin song shares the name of a well-known car brand?

Question: What car-themed 2021 song broke the record for the most streams in a single week?

Question: Which artist released the popular song, “On the Road Again”?

Question: What car-themed song was originally released by Tom Cochrane and repopularized by Rascal Flatts?

Answer: “Life is a Highway.”

Question: What is the first line of AC/DC’s “Highway to Hell”? 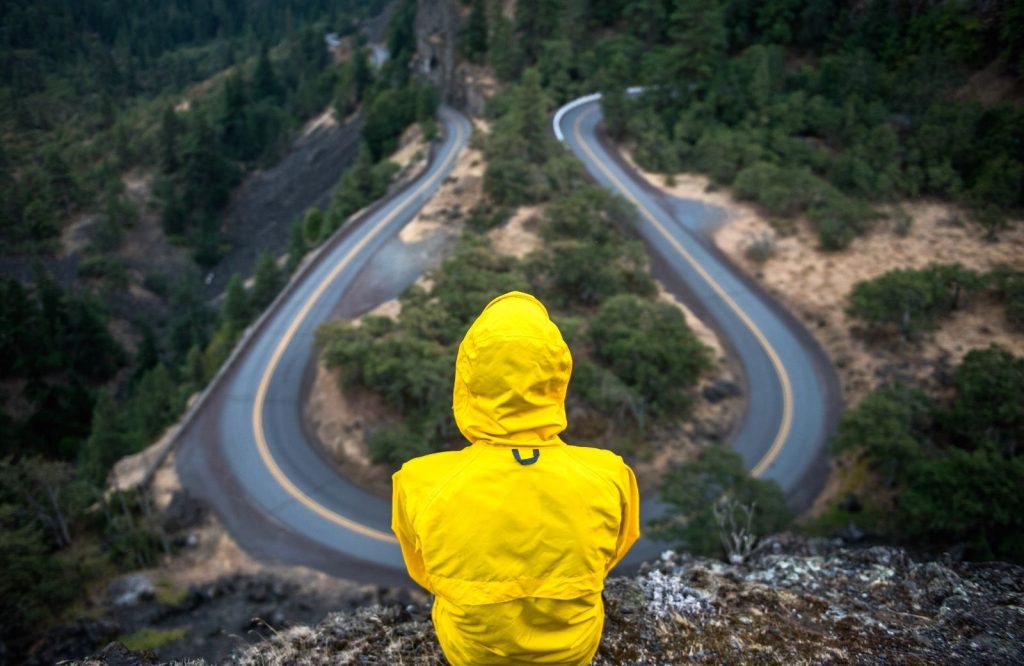 Question: What is Goofy and Max’s final destination on their road trip in The Goofy Movie?

Question: Where do Tony and Meadow go on a road trip in Season 1, Episode 5 of The Sopranos?

Answer: They go to Maine to visit colleges for Meadow.

Question: Where do Lorelai and Rory go on their spontaneous road trip in Season 2, Episode 4 of the Gilmore Girls? 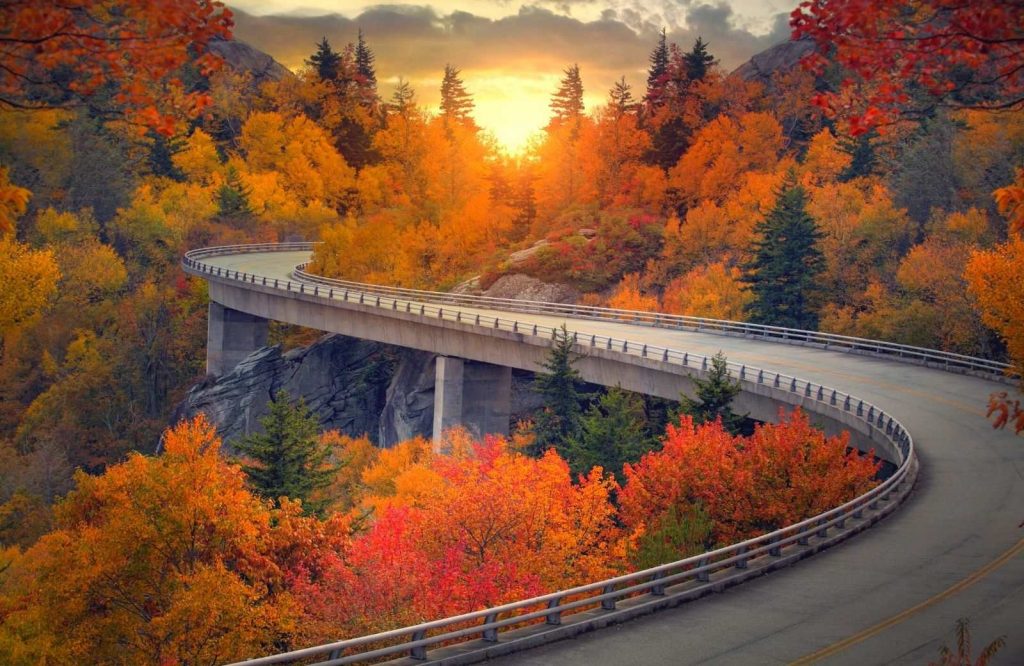 Question: What is the most visited country in the world?

Answer: France! This lovely country welcomed nearly 90 million international visitors in 2019. It’s no surprise to find out that most of these visitors traveled to Paris to see famous sites like the Eiffel Tower, the Louvre Museum, Notre Dame, and the Arc de Triomphe.

Question: What is the most visited state in the US?

Question: What is the most visited attraction in the world?

Answer: The Grand Bazaar in Istanbul, Turkey. This bustling market welcomes about 91 million visitors every single year! With tasty treats, handmade carpets, and shining lanterns, the Grand Bazaar is an amazing place to visit.

Question: What is the most visited attraction in the US?

Answer: Times Square in New York City, New York. This busy square welcomes almost 42 million people every year! After all, with its huge stores, neon signs, and costumed street performers, there is so much to see.

Do you have any suggestions to add to this list of road trip trivia questions? Let me know in the comments below!

Are you looking for more road trip inspiration? You’ll love these posts too!