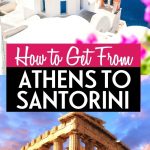 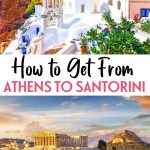 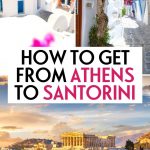 Are you planning a Greek escapade and wondering how you can get from Athens to Santorini? This guide goes over all of your options so you don’t have to stress about all the details!

When people travel to Greece, they often have two main spots that they want to visit: Athens and Santorini. After all, who wouldn’t want to see the historic capital city and one of the best Greek islands for couples?

But, many people often forget about arranging transportation from Athens to Santorini. You can’t simply drive your rental car from one destination to the other.

That said, there are a few different options to get from Athens to Santorini, and this guide has everything you need to know laid out for you!

How Far Is It from Athens to Santorini? 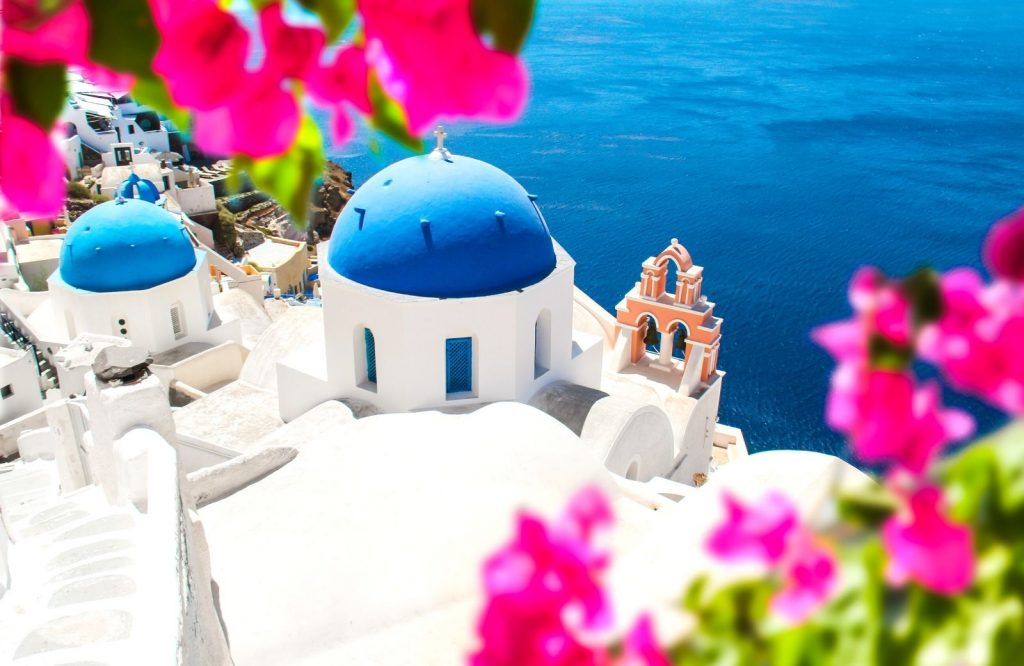 In order to travel from Athens to Santorini, you’ll need to cross part of the Aegean Sea. After all, Santorini is an island!

Between Athens and Santorini, it’s about 127 nautical miles (235 km). While you won’t be able to make this journey by car, you’ll have two different options to choose from — ferry or airplane.

How to Get from Athens to Santorini

In my opinion, the best way to get from Athens to Santorini is by airplane. This option is quick and you’ll literally be saving an entire day. You can spend that day wandering around Santorini instead of being stuck on a ferry.

If you’re only going to spend a few days in Santorini, I recommend taking a plane. The ferries will take up a huge chunk of your day, whereas a flight from Athens to Santorini takes between 45 minutes and 55 minutes.

The cheapest and best website to use to book your flights from Athens to Santorini is Expedia. It shows you all of your flight options including all of the airlines listed below.

The most popular airline for flights between Athens and Santorini is Aegean Airlines. This local airline has nine flights per day between these two Greek destinations.

After Aegean Airlines, Olympic Air is the second most popular airline for those traveling between Athens and Santorini. As a matter of fact, these two companies are essentially the same, since Olympic Air bought Aegean Airlines in 2013. The only real difference between the two airlines is that Aegean Airlines’ planes are about double the size of Olympic Air’s planes. 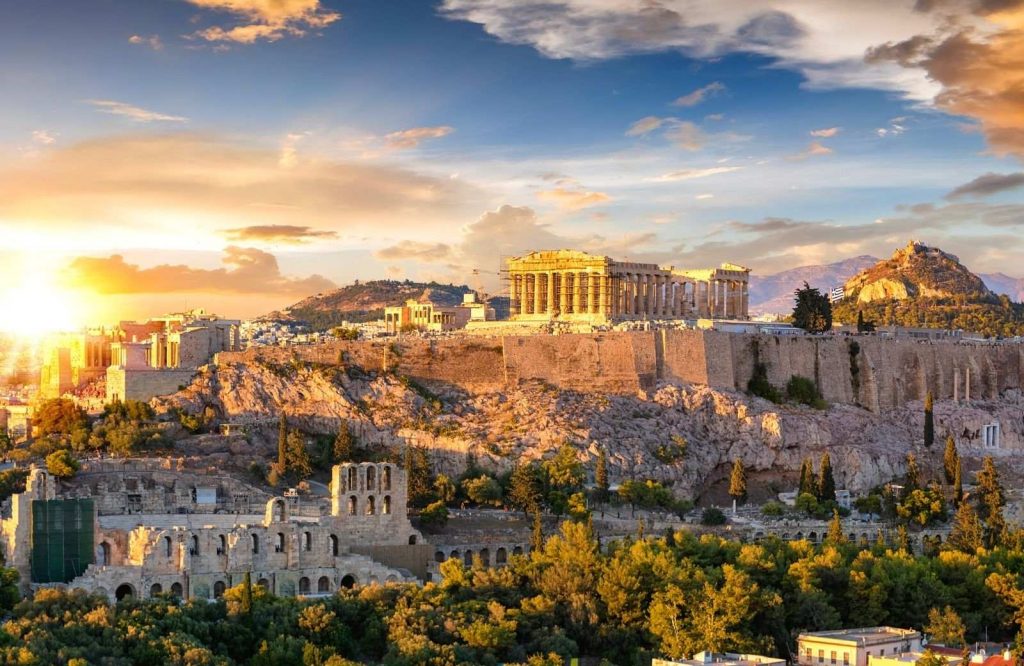 Sky Express is another airline that travels from Athens to Santorini. This airline may have found the ideal balance between frequent flights and relatively low costs.

Volotea is a low-cost Spanish that started flights between Athens and Santorini relatively recently. While all of the previous airlines on this list offer flights between $100 and $250, Volotea offers flights for less than $100, which is perfect if you’re on a budget and on a tight schedule. And if you keep your eyes open (and your alerts set), you can even find seats for as low as $35 each way.

If you’re looking for the cheapest flights from Athens to Santorini, Ryanair is your best bet. While most Ryanair flights hover around $40 to $60 each way, you can actually snag seats for just $18 each way if you keep an eye out for a deal! This price is actually significantly cheaper than the ferries as well, so you can save both time and money.

The main downside to Ryanair’s flights from Athens to Santorini is the fact that there are only a handful of flights offered each week, which means your schedule will not be very flexible.

If you’re hoping to save a little money or take the scenic route, you can take the ferry from Athens to Santorini instead. You’ll be mesmerized by the sea.

There are two main ferry ports near Athens: Piraeus port and Rafina port. The vast majority of ferries from Athens to Santorini depart from the Piraeus port.

If you decide to take the ferry, make sure your tickets as soon as possible. Trust me, Santorini is a very popular destination in Europe.

You’ll also want to make sure that you’ve downloaded plenty of books and movies on your iPad or phone. Don’t forget to pack a few snacks for the journey too!

Lastly, make sure you print your ferry tickets. Some ferry companies require a printed copy and it’s better to be safe than sorry. 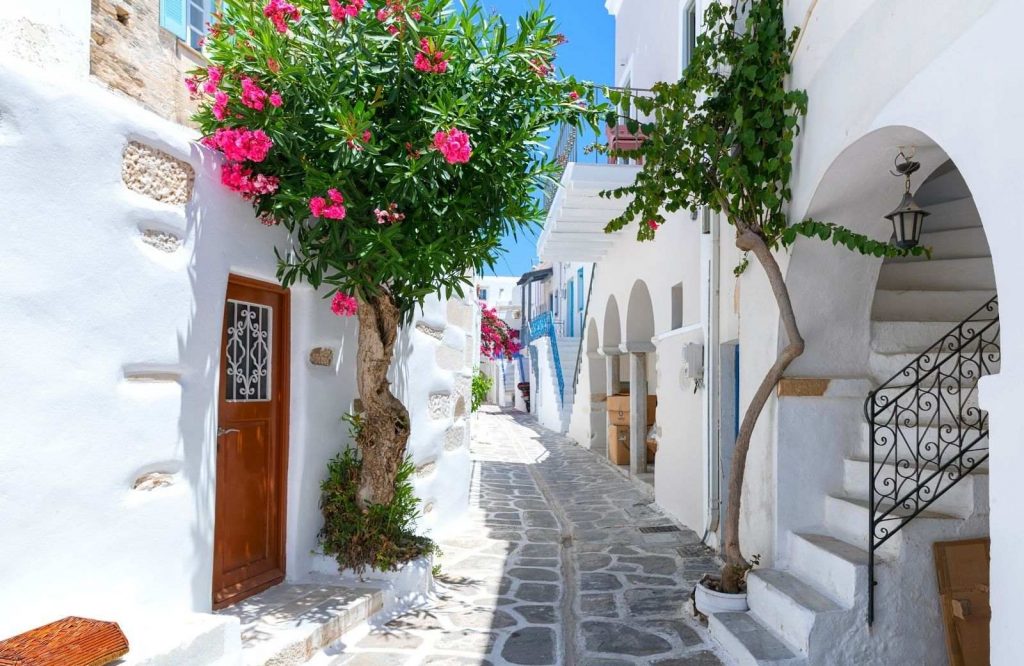 Most people will say that Blue Star is the best ferry from Athens to Santorini, and I have to agree. This is the largest ferry, which means that you’ll get to enjoy the most comfortable ride.

This is also the best option if you’re prone to seasickness, as the larger vessel means you’re less likely to feel the boat’s rocking.

As an added bonus, you’ll even get to see quite a few other Greek Islands along the way. Kithnos, Serifos, and Sifnos are all along the route. And depending on how clear the weather is, you may also be able to see Naxos and Mykonos.

Unfortunately, Blue Star has one major downside. In order to keep the ride as smooth as possible, Blue Star goes slow and steady. This means that the ferry ride is a whopping eight hours long!

Depending on what cabin class you decide to book for your journey, Blue Star ferry tickets cost between $36 and $132.

If you’re looking for a faster ride from Athens to Santorini, you should consider hopping aboard one of Seajets’ ferries. These rides take about 4 and a half hours, which is significantly faster than Blue Star’s ferry rides. That said, this increased speed comes with quite a bit of bumpiness, so the ride isn’t as smooth.

It’s also important to note that Seajets’ ferry rides cost quite a bit more money in comparison to those of Blue Star. Seajets tickets usually cost about $85 to $124, depending on the cabin class. 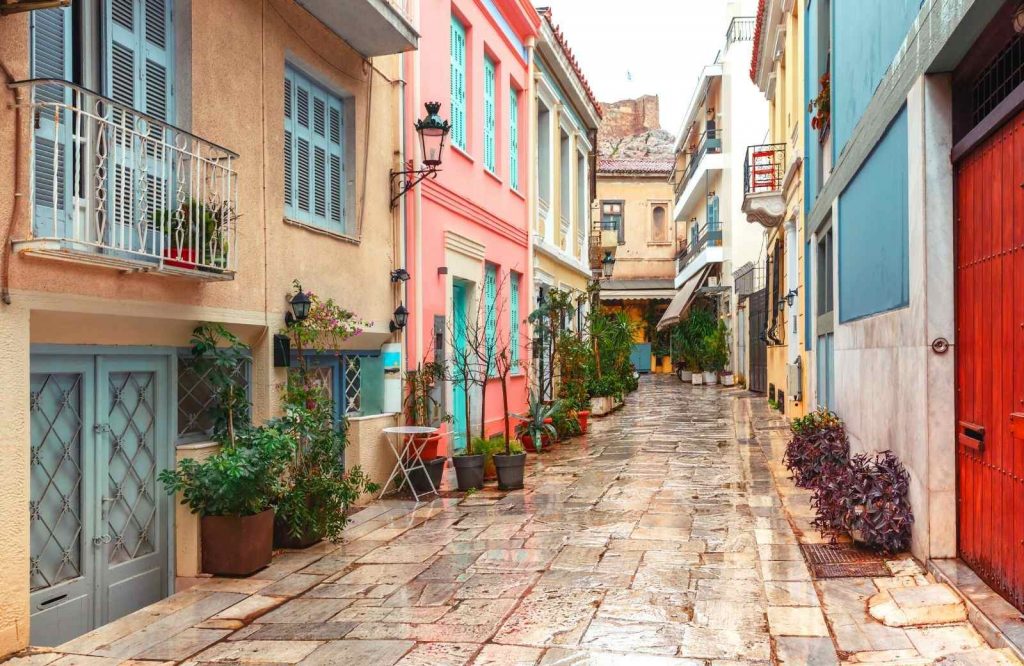 Golden Star Ferries is pretty similar to Seajets. Their rides depart from the Piraeus port, take about five hours, can get quite bumpy, and hover around the same price range ($73 to $87).

Golden Star Ferries also runs a seasonal route (from May to September) from Athens’ Rafina port and Santorini. It is a slightly longer route, but it may be worth it if you happen to be staying closer to the Rafina port than the Piraeus port.

If all of this information seems a bit overwhelming for you, you can take an Athens to Santorini tour instead! That way, the tour provider and guide will iron out all of the details for you.

To make this decision even easier for you, I’ve included a few of the best Athens to Santorini tours for you to pick from.

This 2-day independent tour from Athens to Santorini basically provides you with transportation and accommodation. They’ll arrange the ferry rides to and from Athens, as well as a hotel for you to stay at.

As for what to do in Santorini, that’s all up to you! You can go wherever you want and spend as much time as you like at each of the attractions. If you’re looking for a few suggestions, you can hike to the top of Santorini Volcano, wander through the ruins that inspired Atlantis at the Akrotiri Archeological Site, or stop by a few of the famous blue-domed churches.

Then, at the end of your two days, you’ll be guided back on a pre-booked ferry to Athens. 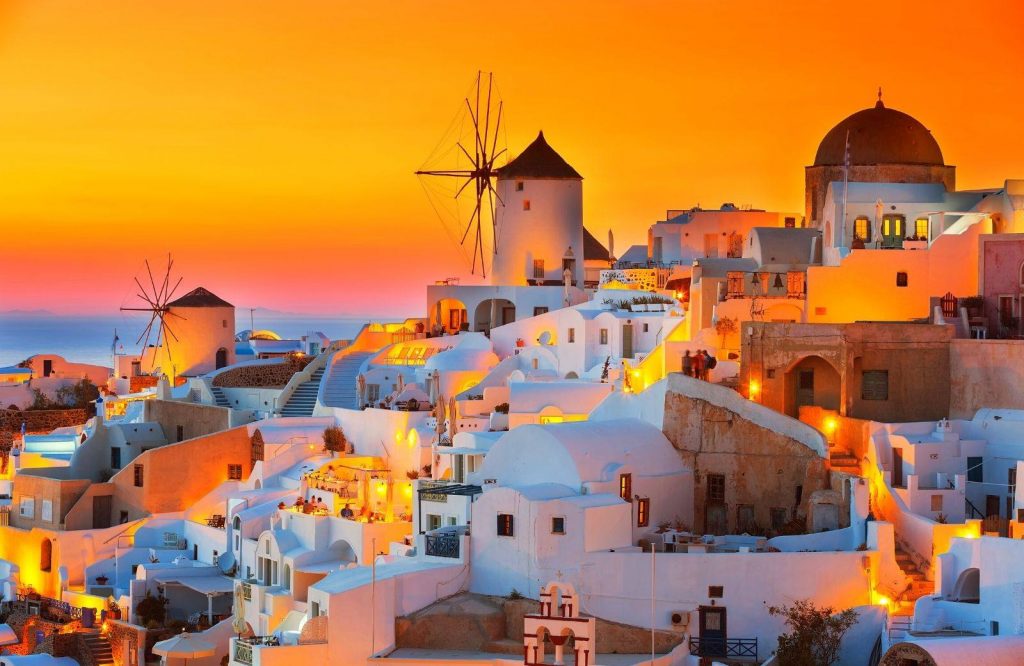 If you’d like to enjoy a longer stay on Greece’s beautiful islands, you should consider booking this 3 day Greek island hopping tour.

When you depart from Athens by ferry, you’ll actually head to Santorini. After Santorini, you’ll head to Mykonos. While there, you can see all of the island’s most famous sites, including the iconic windmills, and Little Venice – and you can do it all on your own schedule!

On the second day of your tour, you have the option of visiting Delos. While in Delos, you can visit the Terrace of the Lions, Temple of Isis and the archaeological museum, House of Dionysus, and much more!

At the end of the three days, you’ll take another ferry from Mykonos back to Athens.

If you don’t want to think about a single planning detail during your trip from Athens to Santorini, this 5-day private tour may be exactly what you’re looking for.

The main difference between these two tours is that the previous one was self-guided, whereas this one includes guided tours of the attractions as well. In other words, your guide on this 5-day tour will be with you just about every step of the way!

During this amazing guided tour, you’ll be able to learn loads of interesting facts about Greece’s islands and explore everything that Santorini has to offer. You’ll also get a private tour of Athens.

If there’s any tour you do from this list, it should be this one! You’ll have the dreamiest getaway in Greece.

Are you traveling to Santorini from Athens? Let me know in the comments below!

Are you looking for more Greece travel inspiration? You’ll love these posts too!

We will be in santorini for 3 days. Best attractions?