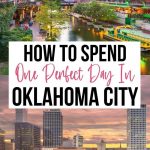 If you’re looking for the perfect one day in Oklahoma City itinerary, I’ve got you covered!

I lived in Oklahoma City for almost four years, and I never really appreciated it. As they say, you never really know what you have until it’s gone.

Whenever I tell people that I lived in Oklahoma, they immediately respond with, “Why?”

And, I understand. Oklahoma isn’t the most popular vacation spot in the United States, and not very many people know much about it.

But, trust me when I say that OKC is worth a visit! It’s a unique and hip city that’s brimming with coffee shops, world-class restaurants, a thriving brunch scene, and exciting attractions.

I honestly think it has a Los Angeles vibe, minus the beaches. And the traffic. And the expensive price tags.

I will warn you, though — you’re just barely going to scratch if you spend one day in Oklahoma City. You’ll be left wanting more.

So, without further ado, here is my perfect one day in Oklahoma City itinerary.

I’ve organized this itinerary by neighborhood because that’s the easiest way to see Oklahoma City. Plus, it’s not fun to drive all over the place when you’re only in town for one day.

The Most Epic One Day in Oklahoma City 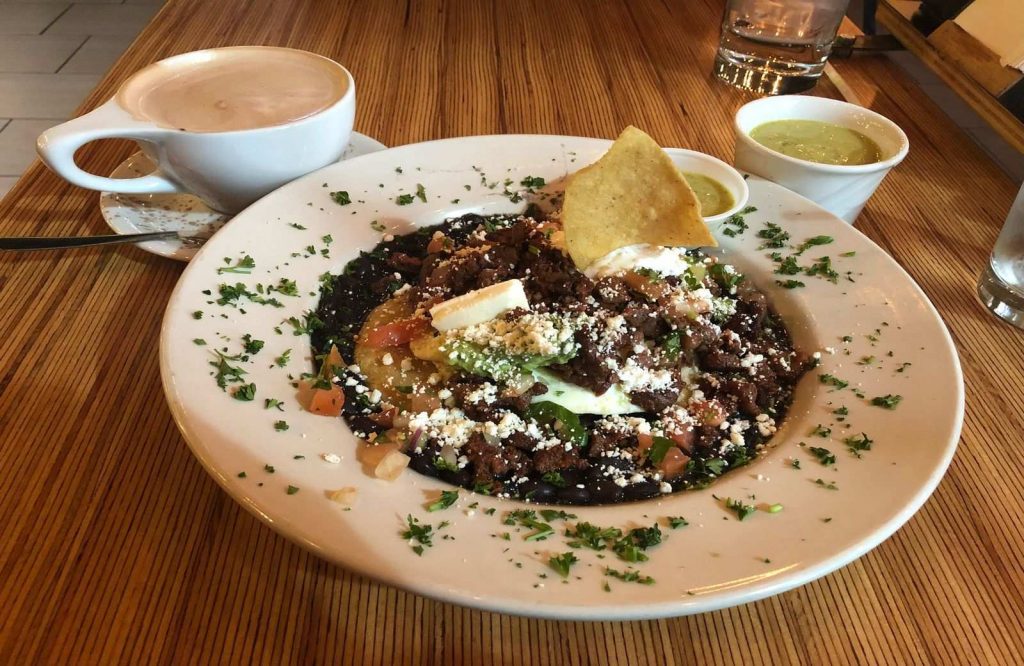 You can’t spend one day in Oklahoma City without grabbing a meal at Cafe Kacao!

Start your day off in OKC at one of Oklahoma City’s most popular brunch spots — Cafe Kacao — a Latin-inspired cafe.

It’s so good that I used to go there every weekend for brunch. Their iced horchata latte and Mexican cold brew are my personal favorites.

For breakfast, I recommend their huevos rancheros or the chilaquiles. Both are a flavor burst in your mouth and will leave you full until lunchtime. 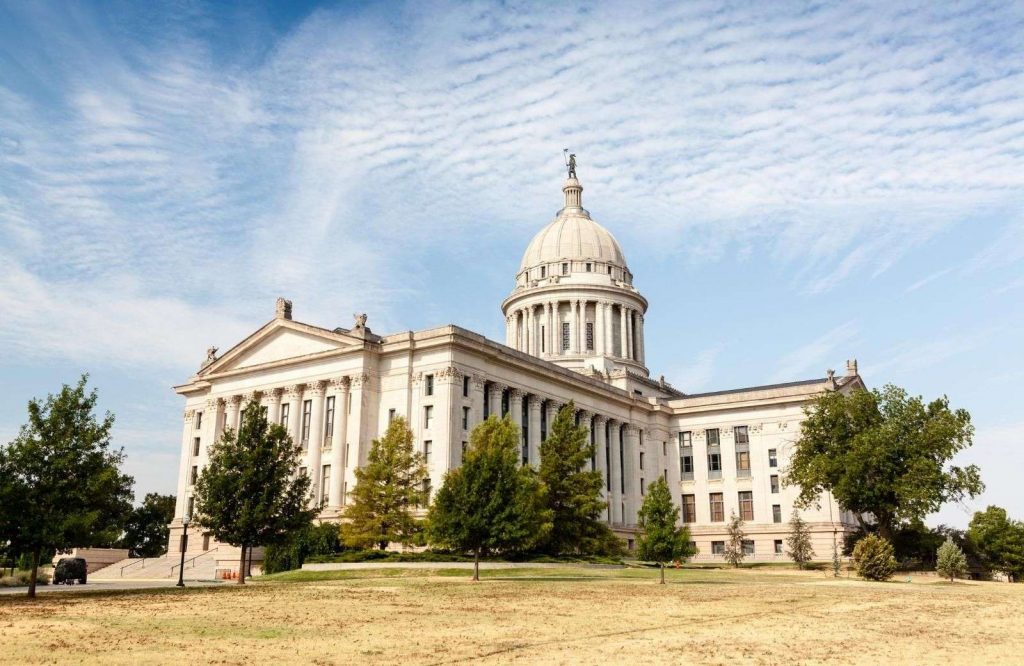 The Oklahoma State Capitol is one of the most iconic buildings in Oklahoma City. It’s a beautiful Art Deco building that was completed in 1917.

The best part about visiting the Capitol is that it’s free! For time’s sake, I recommend just seeing it from the outside.

After the Capitol, we’ll head over to the Paseo Arts District.

The Paseo Arts District is an artsy enclave that’s home to over 20 galleries and over 80 artists on a two-block street with Spanish revival architecture.

It’s the perfect place to walk around, do some shopping, and admire the local art.

The Plaza District is an artsy, trendy neighborhood in Oklahoma City that’s home to a variety of local boutiques, eclectic art galleries, restaurants, and bars.

Some of my favorite places in the Plaza District are Oak and Ore (craft brewery), the Mule (the fried cheese curds are little nuggets of pure joy), and Empire Slice House (the best pizza by the slice. Not a day goes by that I don’t think of their za).

Sadly, these places won’t be open since you’re visiting in the morning. You’ll just have to come back!

Before we leave this area, hop into DNA Galleries or Out On A Limb Boutique to take home a local souvenir.

The Oklahoma City National Memorial & Museum is a moving tribute to the victims of the 1995 bombing of the Alfred P. Murrah Building.

The museum tells the story of that tragic day through exhibits, photos, and personal narratives from survivors and first responders.

The memorial grounds are beautiful and serene, with a reflecting pool and chairs for each victim of the bombing.

The Oklahoma City National Memorial & Museum is a powerful reminder of the tragedy of that day and the strength of the human spirit in the face of adversity.

Lunch Time at the Collective Kitchens and Cocktails

For lunch, we’ll head to one of my favorite places in Oklahoma City — the Collective!

It’s Oklahoma City’s first food hall that features nine kitchens, a bar with over forty taps, a coffee shop, and a rooftop patio with stunning views of downtown.

You can find everything from poke bowls to cheesesteaks to Belgian waffles.

If you’re into cocktails, this is the spot! If booze isn’t your thing, you can grab a latte from Conley Coffee Co. 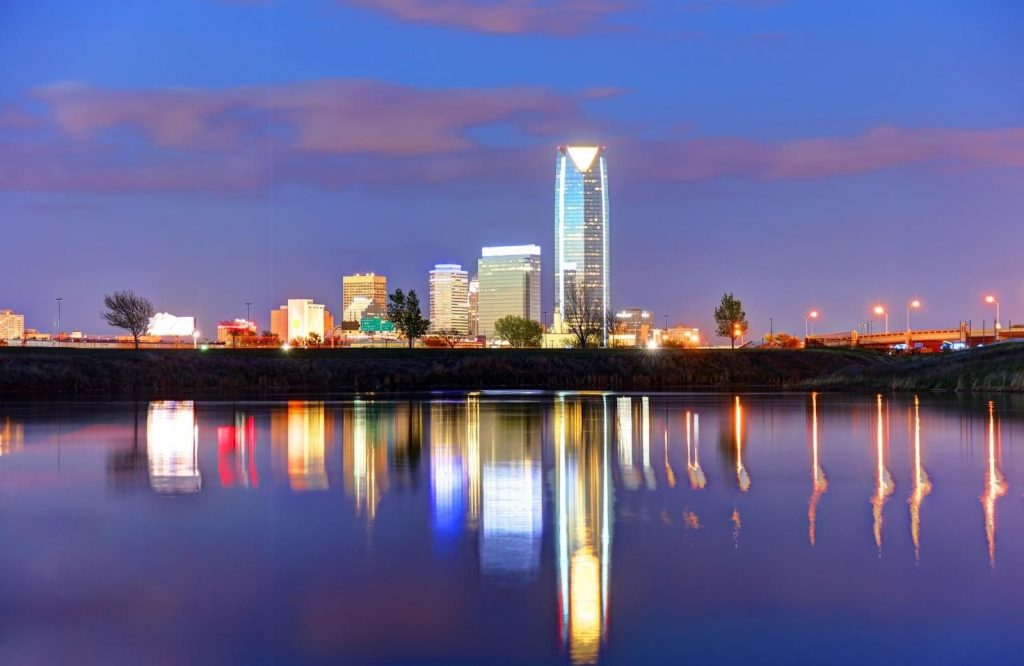 See the tallest building? Vast is at the top of that building.

Located in the Devon Tower, Vast is a fine dining restaurant with an impressive selection of steak and more.

The best part about Vast is the 360-degree views of the cityscape below since it’s perched on the 49th floor.

I recommend getting a dessert and a drink and taking in the views for a bit. 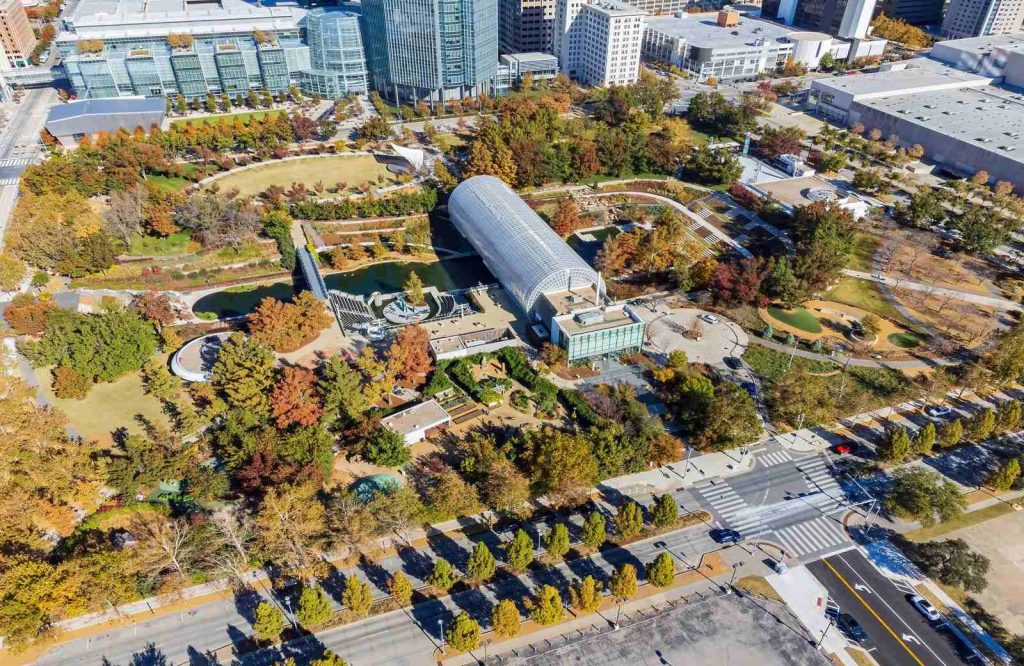 The Myriad Botanical Gardens are a must on any one day in Oklahoma City itinerary!

After Vast, we’ll walk the dessert off with a stroll through Myriad Botanical Gardens.

Myriad Botanical Gardens is a 17-acre urban oasis in the heart of downtown Oklahoma City.

It’s the perfect place to relax and escape the hustle and bustle of the city.

These gardens hold a special place in my heart because that’s where I got proposed to. They’re also one of the most romantic getaways in Oklahoma. 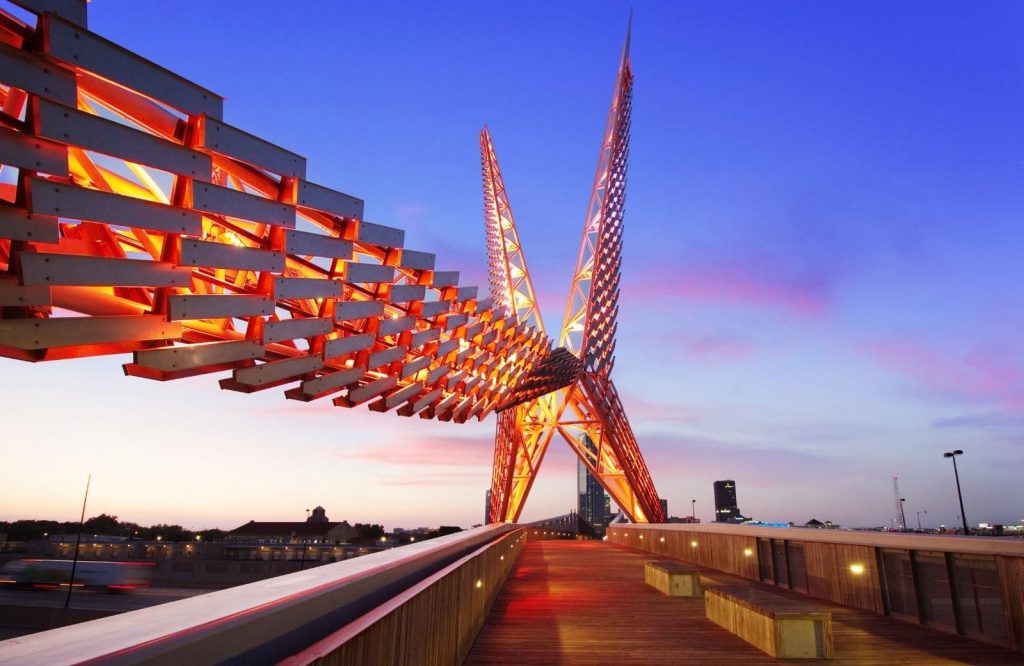 From the gardens, head to Scissortail Park and Skydance Bridge.

Scissortail Park is a 70-acre urban park that opened in 2019.

The park has a lake, walking trails lined with native prairie grasses, flower gardens, and stunning views of the Oklahoma City skyline.

Skydance Bridge is a pedestrian bridge that spans 380 feet and connects the park to downtown.

It resembles Oklahoma’s state bird — the scissor-tailed flycatcher, and it lights up at night.

It’s one of the most photographed places in Oklahoma City! 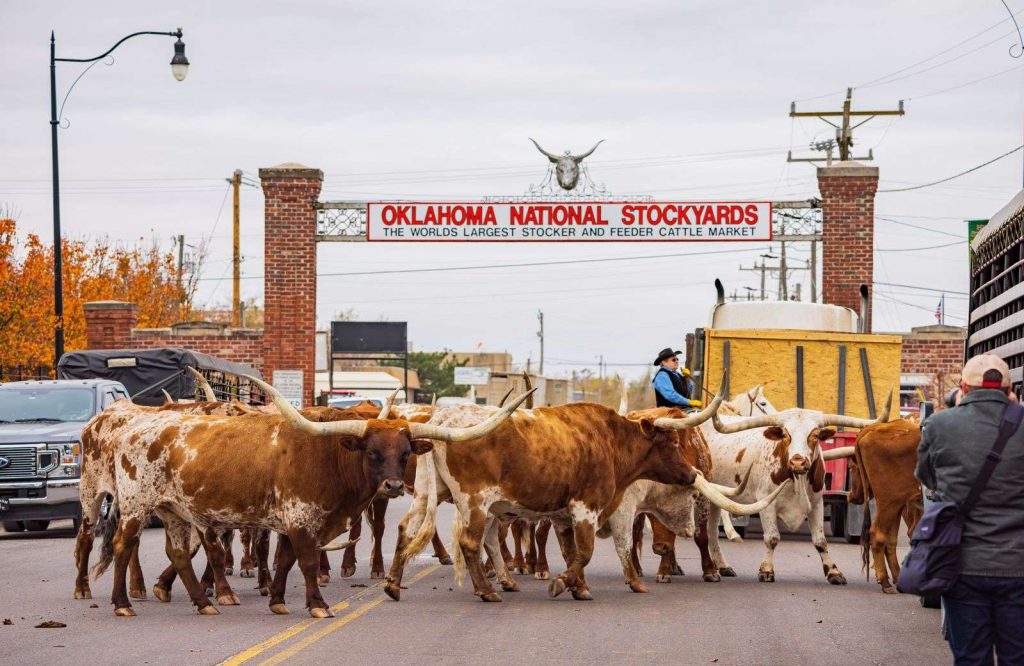 A unique place to visit during your one day in Oklahoma City getaway is the Stockyards.

Stockyards City is a historic district that was once the world’s largest stocker and feeder cattle market.

Today, you can find western-themed shops, restaurants, bars, and live entertainment in this area.

If you’re there at the right time, you can watch a livestock auction

You might love the cowboy culture and take home a pair of cowboy boots. 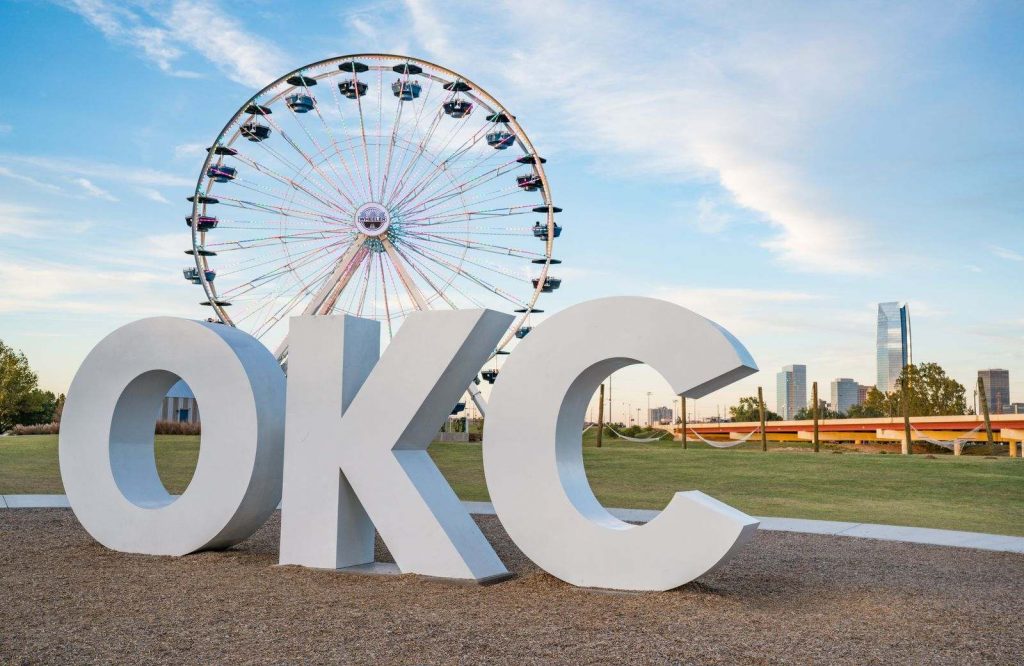 Located in the Wheeler District, this Ferris wheel was relocated from the Santa Monica Pier.

Even if you don’t want to ride it, it’s still worth checking out.

You’re probably feeling a little thirsty or snacky right about now so let’s head to the Jones Assembly for some drinks and appetizers.

The Jones Assembly is a music hall, restaurant, and bar all in one. They have an extensive list of craft cocktails, beers, and wine.

And the food is pretty amazing too. I recommend getting the scratch biscuits and okra to share — two delicious Oklahoma delicacies.

You also have to try the frose (frozen rose)! It’s refreshing and there’s usually a gummy candy at the bottom of the glass. 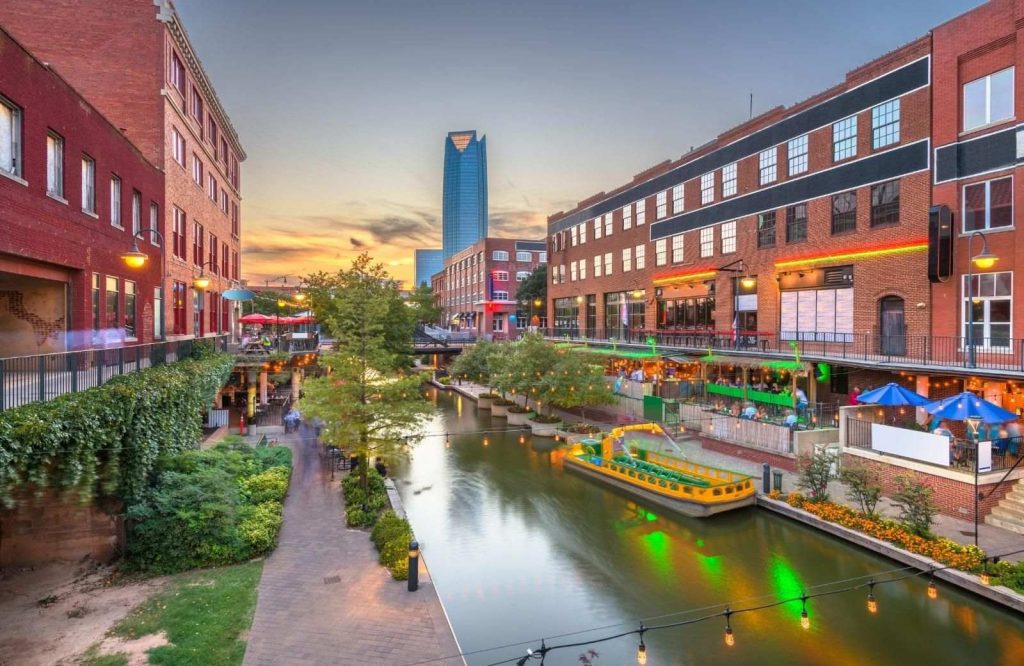 One of the most iconic things to check out during your one day in Oklahoma City getaway is Bricktown.

Both locals and tourists love Bricktown. In recent years, the area has undergone a major revitalization, with new businesses and attractions opening up on a regular basis.

As a result, Bricktown has become one of the most vibrant and exciting areas in the city.

The area is home to a variety of restaurants, bars, shops, as well as the Paycom Center (previously known as the Chesapeake Energy Arena and home to the Oklahoma City Thunder).

You can’t come to Bricktown without taking a ride on the Bricktown Canal.

The Bricktown Canal is one of the most popular attractions in Bricktown and you can take a water taxi tour to see the area and learn more about OKC. 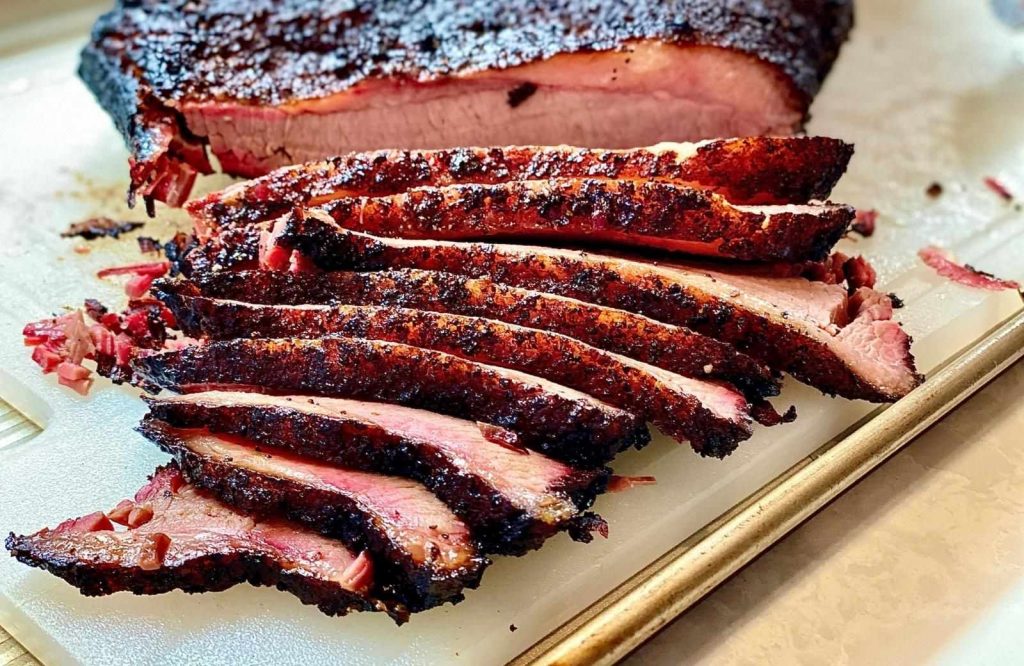 Oklahoma is home to some of the best barbecue in the country! 😍

We’re ending our one day in Oklahoma City itinerary by having dinner at Iron Star Barbecue.

Barbecue is one of the most beloved foods in Oklahoma and you’ll be doing yourself a disservice if you don’t try it while you’re here.

Iron Star is one of the best barbecue joints in OKC and they have a great selection of meats, sides, and desserts.

I always get the ribs with a side of sauteed green beans, but their brisket is also fantastic.

I’ll just warn you — if you still have room for dessert left after your dinner, you didn’t do Iron Star right.

One Day in Oklahoma City Highlights 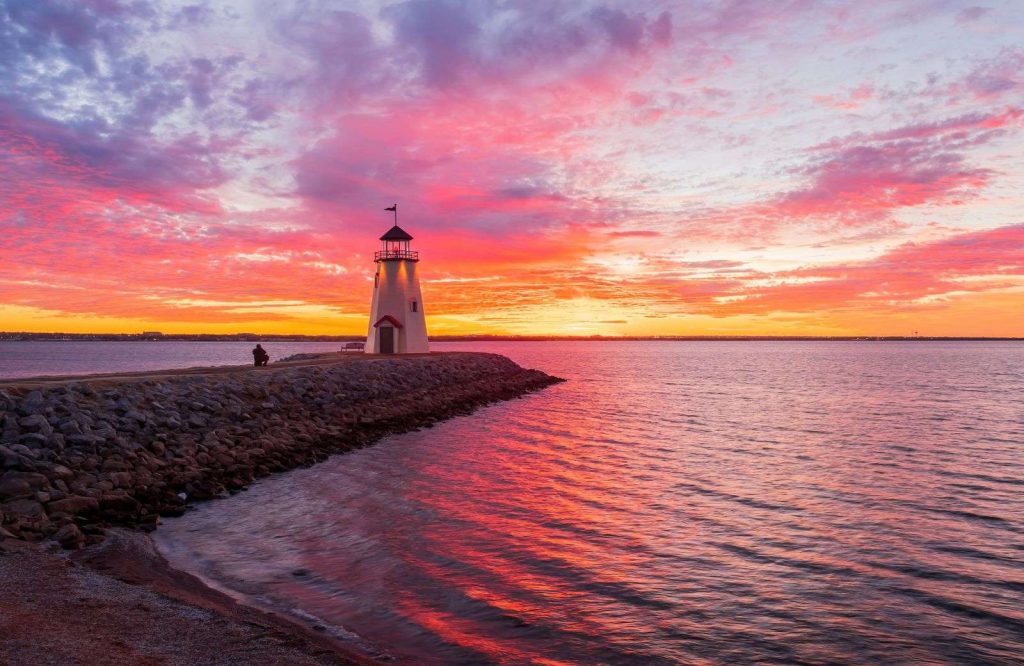 Lake Hefner is another fun place to check out during a one day in Oklahoma City trip.

Final Thoughts About How to Spend One Day in Oklahoma City

Oklahoma City is a great place to visit, with lots of things to do and see.

Whether you’re looking to learn about Native American history, experience the local culture, or just eat some good food, Oklahoma City has you covered.

But, next time, turn this one day in Oklahoma City into a USA weekend getaway so you can explore more of what this city has to offer!

Have you ever been to Oklahoma City? What’s your favorite thing to do there? Let me know in the comments!