The Middle East is becoming a hot tourist destination. It’s actually my favorite region in the entire world. New attractions are popping up left and right and locals are becoming more welcoming towards tourists. When people travel to the Middle East, they generally flock to the UAE, Jordan, Morocco or Turkey. However, there’s another hidden gem in this part of the world – Kuwait. I’ll admit that I didn’t exactly volunteer to go to Kuwait right away. We were in Dubai and needed to reset our visas. We happened to find reasonable flights to Kuwait and that’s how we ended up there. We honestly didn’t have very many expectations before our visit, but we were proven wrong. Kuwait blew us away in every which way. We left this incredible country wanting more. If you’re curious about exploring lesser-known areas of the Middle East, Kuwait City is perfect for you. Here are my top travel tips for visiting Kuwait City and a list of fun things to do here. 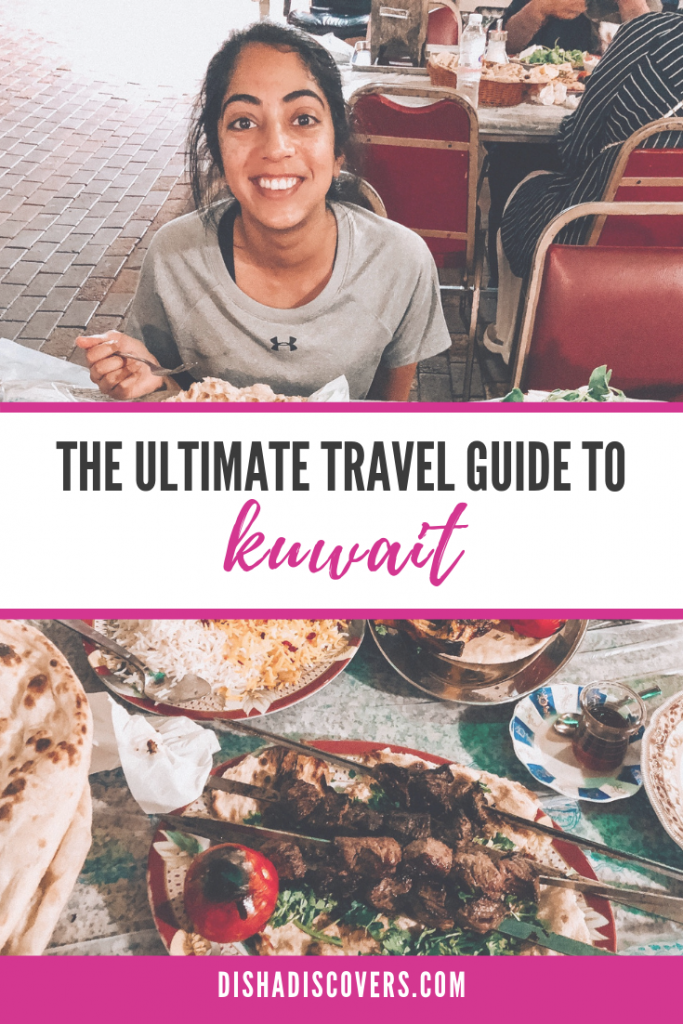 This is a group of three towers that symbolizes Kuwait’s economic and cultural rebirth. The towers are stunning, especially at night. We had a beautiful view of them from our hotel room and we were in awe. You can go up in the tower and get a breathtaking view of the city. You all know I’m way too cheap to pay for that. Ha!  The top floor rotates so you get to see the entire city, and there’s also a restaurant for you to dine in. 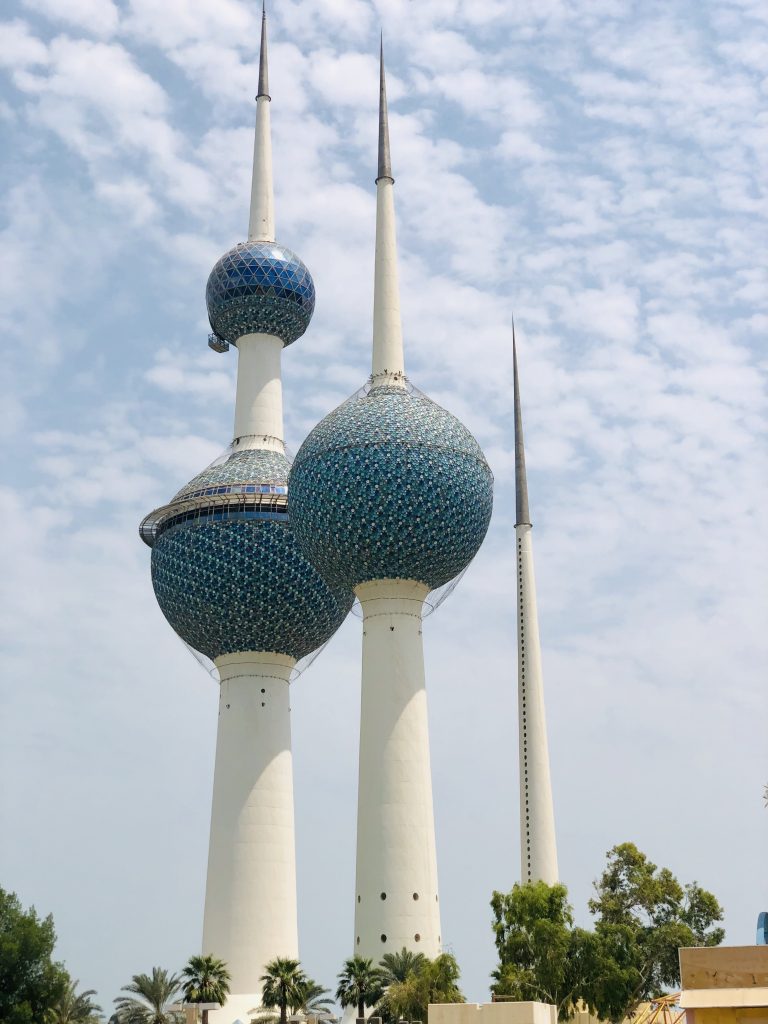 The Grand Mosque is the largest and official mosque in Kuwait and the eighth largest mosque in the world. The mosque offers free guided tours, but tours are not available during Ramadan. Make sure that you are dressed properly – cover your legs and shoulders. Ladies, they’ll provide you with a headscarf if you don’t have one.

This is one of Kuwait’s oldest traditional markets and the deals are unbeatable. We went to this area every night for dinner and had the best time. The restaurants inside the souk are very traditional. I don’t think very many tourists were brave enough to dine here which meant that we were the only tourists at the restaurants. In turn, we received exceptional service and care from the staff. We had the time of our lives trying local dishes and drinking Arabic tea. In fact, these are some of my fondest travel memories. Aside from restaurants, we spent several hours just wandering around the souk and checking out the shops. You’ll find shops that sell traditional outfits, jewelry, and other Arab antiques. If you’re a foodie like me, you’ll love the shops here that sell spices, sweets, fruit, and more. This was my absolute favorite area of Kuwait City. 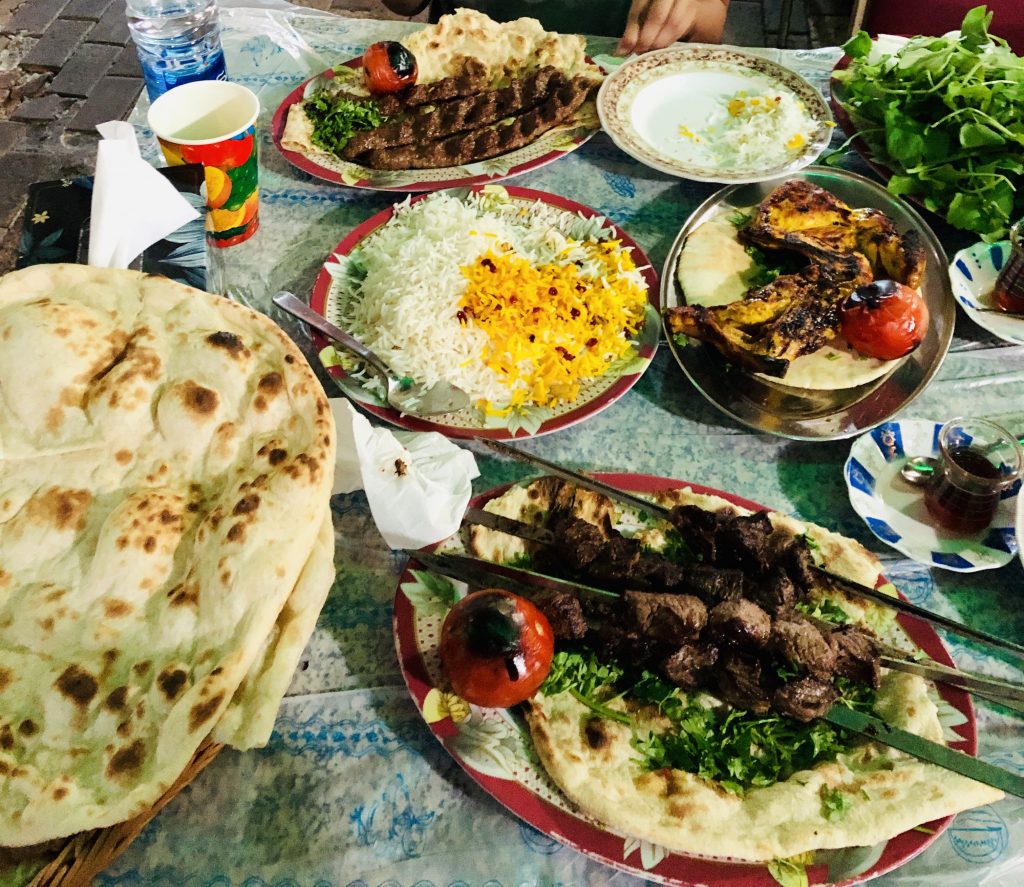 The yummiest meal ever!

Sadu House is a traditional Kuwaiti style house that showcases the art of Bedouin weaving and its history. Entry is free and they have several exhibition rooms where you can learn more about the history of weaving. They also have outfits, bags, and rugs on display, which I found really interesting. The patterns on these items are so intricate and beautiful. It’s super close to the National Museum so you can combine your visits. 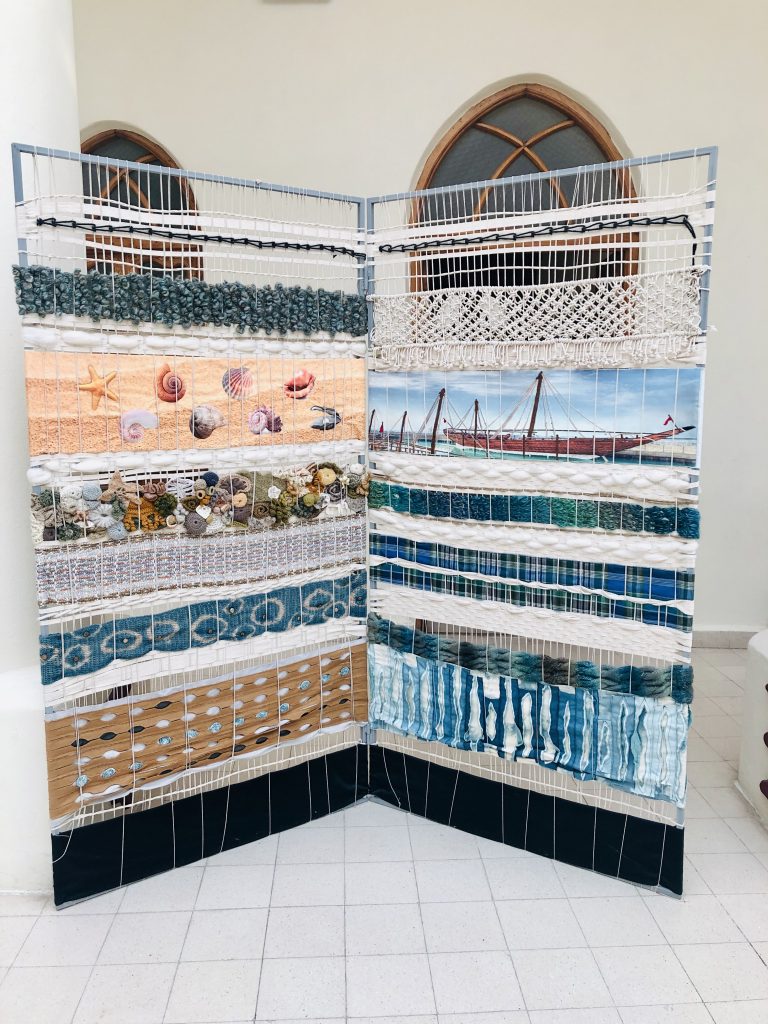 This museum is a great place to learn about the history and traditions of Kuwait. The museum is comprised of several buildings and four sections – Kuwait Heritage Museum, Archaeological Museum, Boom al Mouhallab, and the Planetarium. Unfortunately, some of the sections were closed when we went as they were undergoing renovations. The Heritage Museum was very eye-opening as it gave a thorough view of Kuwait’s history from the very beginning. One part of the museum has life-sized wax models that are performing difference crafts and tasks. This part of the museum depicts a street so it actually feels like you’re not in a museum. Another part of the museum shows actual objects that were collected from the past and put on display. Some of these objects include musical instruments. The final part of the Heritage Museum displays photos of what Kuwait used to look like in the past. The vibe of the Heritage Museum was rather creepy as the lighting was very dark in there. Despite that, we learned a lot about Kuwaiti history and walked out knowing more about the culture. 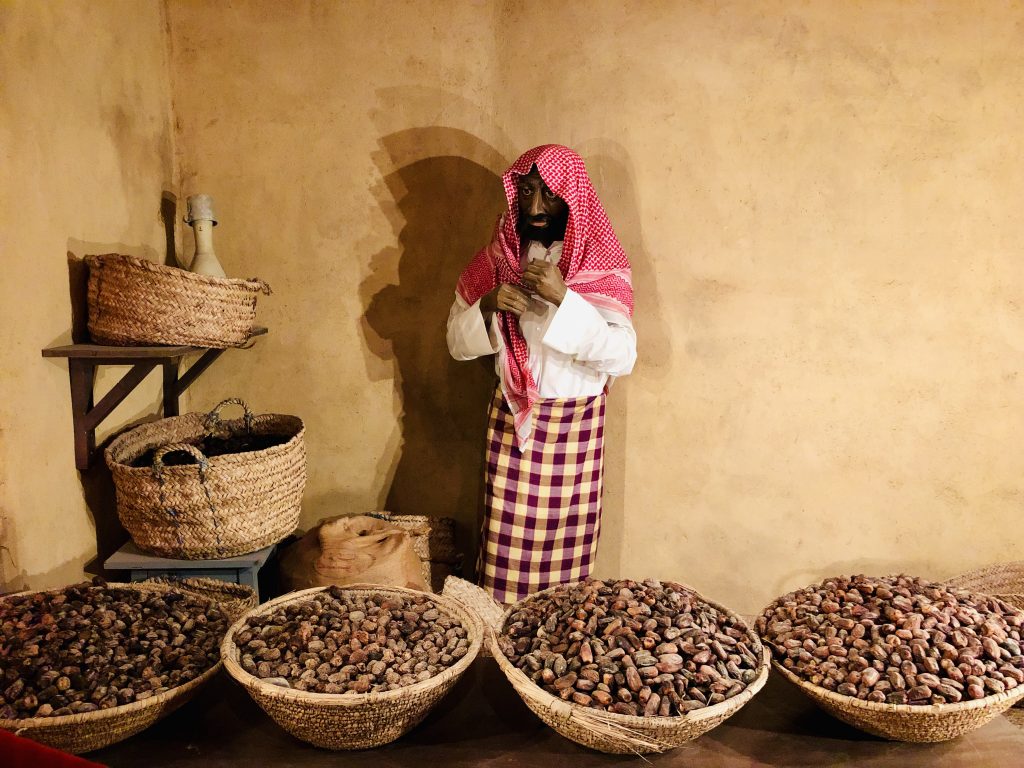 I loved walking through this part of the museum and seeing these life-sized wax statues demonstrating certain trades and crafts.

This tower is a symbol of Kuwait’s liberation and it’s the second-largest tower in the country. It’s named Liberation Tower because of Kuwait’s freedom from Iraqi occupation during the Gulf War. The tower has a revolving restaurant and an observation deck. Once again, your girl was too cheap to pay to go to the top of a building.

I know it’s crazy to put a mall on my list of things to do. But, hear me out. This mall is the largest shopping mall in Kuwait and the second largest mall in the Middle East. I wanted to pack my bags up and move into this mall. I’m not much into shopping, but I still enjoyed walking around. It has 800+ stores, cafes, cinemas, fountains, and restaurants. This will make my American peeps happy – it has Texas Roadhouse, Olive Garden, Red Lobster, Raising Cane’s, Cheesecake Factory and more. Duh, I ate at Olive Garden. The mall is divided into seven districts and each district has a different feel to it. For example, one district is hipper and caters to younger people, whereas another district is more traditional. I highly recommend grabbing a coffee at a cafe and doing some people watching. 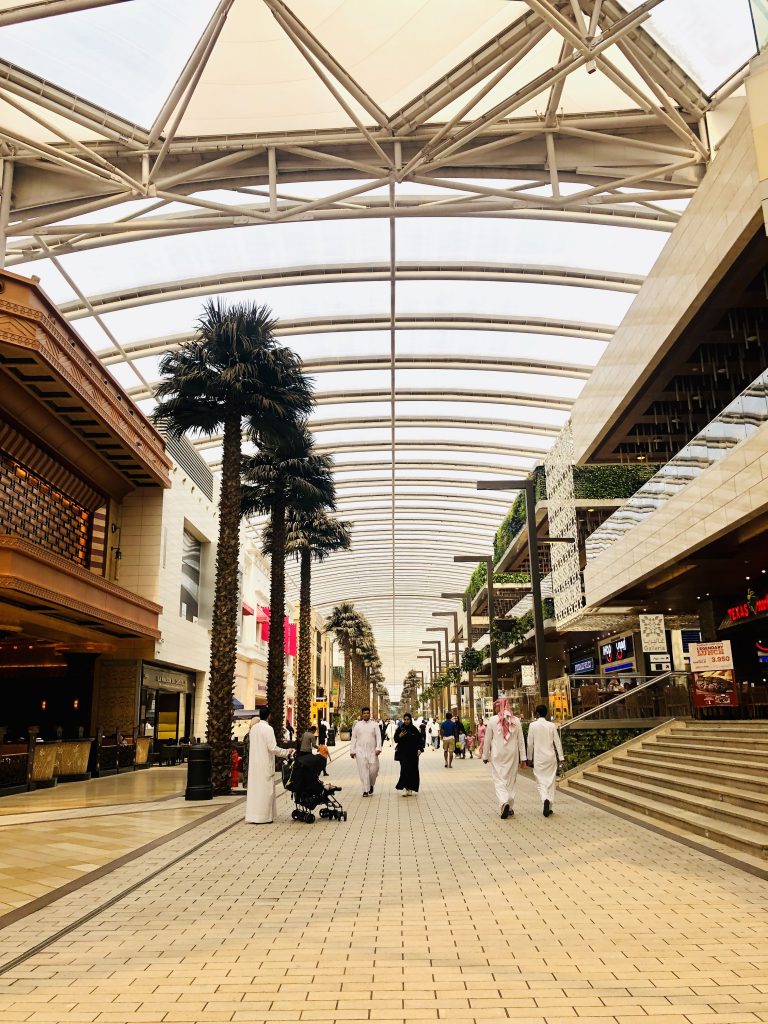 Yes, there are palm trees inside of Avenues Mall. 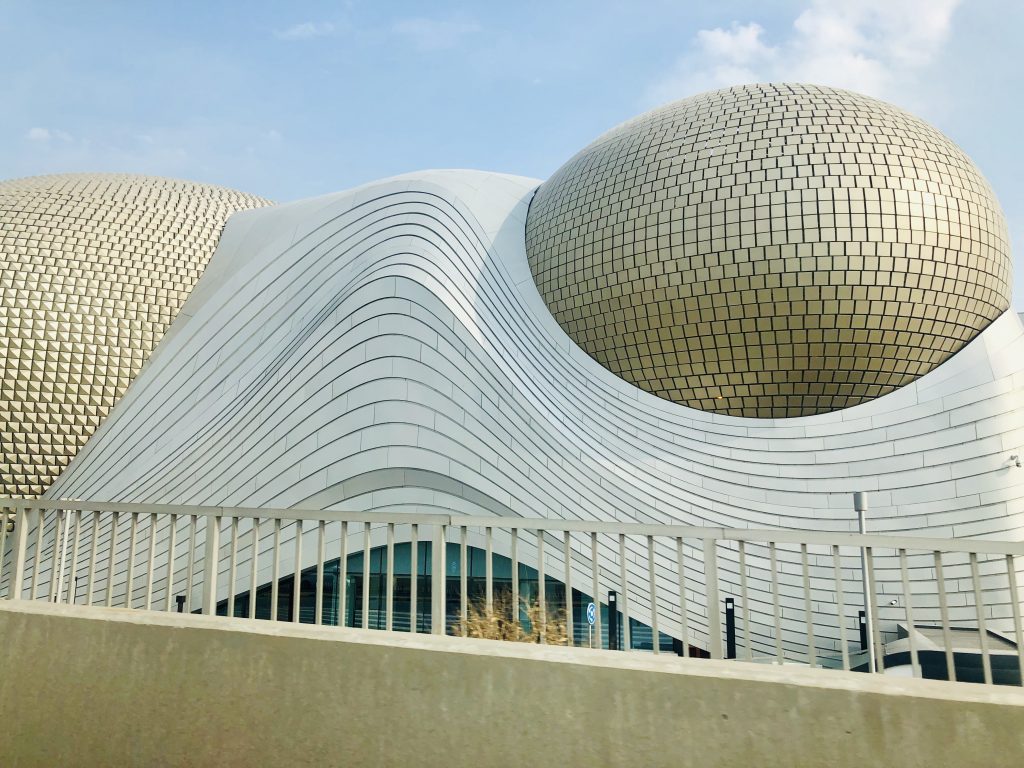 This is what the outside of the mall looks like. Isn’t that architecture insane?

This island is an hour ferry ride away from Kuwait City. It’s essentially an outdoor museum that portrays the devastation of the Gulf War. This island was home to 2000+ people, but they were forced to the mainland when Iraq invaded it during the war. To this day, all of the homes and buildings remain uninhabited. Sadly, we weren’t able to go because the heat was too much to handle.

At the end of a long day’s worth of sightseeing, go relax by the beach. Kuwait’s coastline is gorgeous and has crystal clear blue water. The beaches are hit or miss and expect there to be some litter. Expect to pay at beach parks and beach clubs. 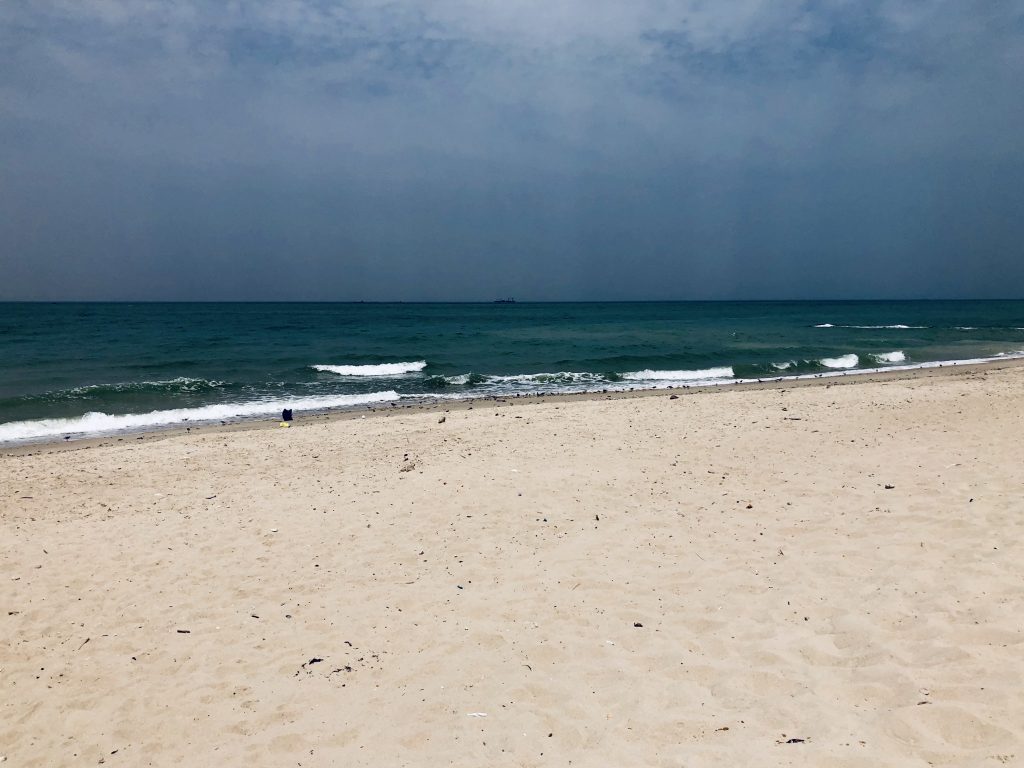 One of the many beautiful beaches in Kuwait City.

Resources for Your Trip to Kuwait:

Flights: I use Kiwi.com and Skyscanner. These are my go-to search engines that help me find cheap flights all around the world and they will help you find flights to Kuwait.

Accommodation: If you want to stay at a hotel, use Hotels.com. I use it all the time because it provides the cheapest rates for hotels. Don’t forget to join their rewards program. Every tenth night is free!

Travel Insurance: Kuwait City is ultra-safe. But, you never know when accidents can happen. Don’t forget to protect yourself against flight cancellations, unexpected illnesses, theft and more. RoamRight has great customer service and benefits.

Tours: I’m mostly a DIY (do it yourself) traveler, but I don’t hate on people who do tours. You can use Viator and there are a few fun tours you can take in Kuwait City.

Have you been to Kuwait? If so, what did you think about it? Let me know in the comments below.

I hope you found this article helpful for planning your trip to Kuwait. Don’t forget to pin it for later! 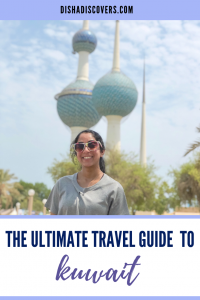 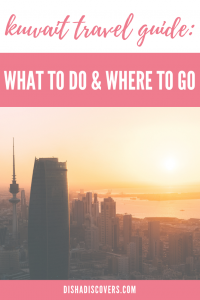 Check your inbox for your free guide to finding cheap flights.

Kuwait was the most and beautiful country that i visited i was there 4c3 months. I had a great time there very friendly people specially my husband and his whole family. Amazing place food and everything. I can't wait to visit again. Inshaallah

Those Kuwaiti dishes, though! :O Thank you for this. I love this post of yours!

Kuwait stole my heart! I can't wait to go back and visit. Thanks for reading!

Thanks for reading, Imran. Unfortunately, I'm not into shopping much so I won't be writing posts related to that. I appreciate the suggestion though.

Kuwait is somewhere I never thought about visiting before reading this. I love the middle eastern countries we have visited so far. The architecture in Kuwait looks amazing. Thanks for adding to our bucket list.

Thanks so much for reading! You will love Kuwait!

One of thing I love most about travel is food. And I could go there just to eat. However you have shown some other amazing reasons to visit. It’s good to open our minds and visit places we did not at first think of visiting.

I completely agree with you. Thank you for reading!